Not so long ago, Belgrade was known as an avant-garde city, far more open than the rest of Eastern Europe and full of bohemian energy.

Not all of the nine million tourists who visited Yugoslavia in 1988 wanted to lie on the beach beside the Adriatic. Before a decade of wars, international isolation and economic turmoil stifled its progressive vigour, Belgrade used to attract young people from Western Europe as well as the rest of the Balkans. 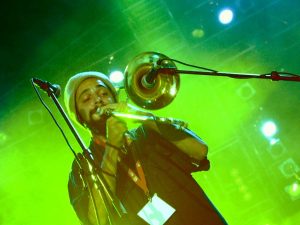 They are starting to return. This summer, a quarter of a million people will gather on a beautiful island in the middle of the Danube for Belgrade’s first proper music festival.

ECHO draws its inspiration from all over the world, but it thrives on the anarchic character of this city. Like Dublin and Amsterdam, it is proud of its reputation as a party capital.

That spirit did not die when sophistication gave way to polyester primitivism in the 1990’s. The problem has been finding the right outlets. 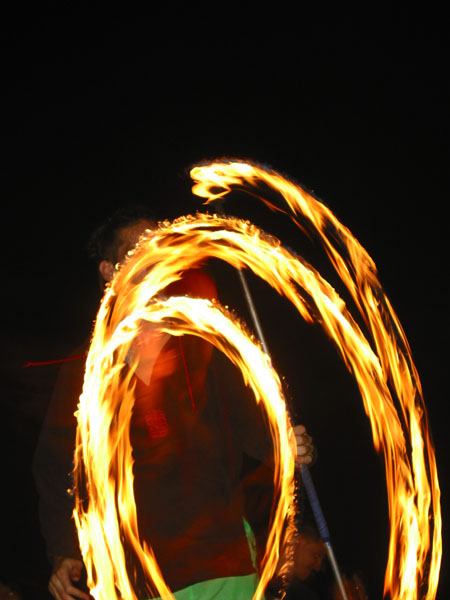 “It is always the same,” mused the French philosopher Jean Baudrillard. “Once you are liberated, you are forced to ask who you are.”

Rather than retreat into ourselves, we have decided to act.

“Merge an aggressive entrepreneurial spirit with the artistic jones to produce – this is how a ‘movement’ is born,” said Darren Bergstein, a New York music journalist. “At heart this is an attitude that helps to energise, dynamise and upset the pecking order. It’s what art lives for, and it forces those who make and shake to act.”

For years, Belgrade has been crying out for a place where young people can go to experience new influences from around the world, in an environment unpolluted by the negativity of the past decade. Now it has one. 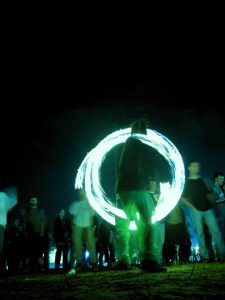 Right in the centre of the city, there is an uninhabited island that stretches for several kilometres along the banks of the Danube. Its surface is covered by trees, apart from a small cleared area at the western tip beside a small bathing beach. From July 10 to July 13, this is the home of ECHO.

The island is a sanctuary that we are fortunate to be able to enjoy. We must respect it and protect it from overexploitation and the decay that infests other parts of this city.

“Ecological awareness in that deep sense recognises the fundamental interdependence of all phenomena and the embeddedness of individuals and societies in the cyclical processes of nature,” wrote Fritjof Capra in The Tao of Physics, an exploration of the parallels between the teachings of Eastern mysticism and the latest scientific discoveries. 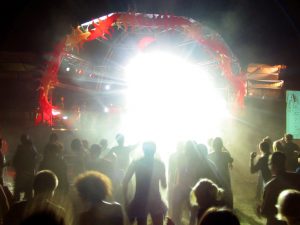 More recent research in the field of non-equilibrium statistical physics has also proved beyond doubt that it is impossible to determine the future by studying the past. You have to make it happen.

With a simple sound system, a power supply and an open space you can entertain thousands of people – provided they like your taste in music.

Why aren’t there more outdoor events here? We believe there should be.

Easy access to digital equipment has revolutionised music. Anyone can start a studio in their own bedroom using just a regular PC and basic DJ equipment is getting cheaper all the time.

“Science and technology multiply around us,” notes the British writer J.G. Ballard. “To an increasing extent they dictate the languages in which we speak and think. Either we use those languages or we remain mute.”

The future of the Balkans lies in closer integration with the rest of Europe and ECHO is a catalyst in that process, attracting thousands of new visitors to this region.

Around the world, there is a constant craving for innovation, particularly when it comes to entertainment.

Millions of young people flocked to Goa, Ibiza and Thailand in the 1970’s, 1980’s and 1990’s because they were searching for novelty as well as the exotic.

Now this city has something unique to offer. Not just for four days in July, but for the future. The island will become the heart of a new Belgrade: a place where young people are making space for each other to enjoy.

Historically the dividing line between East and West, it is a location naturally suited to eclecticism – the precondition for success in a world of compatible differences.

Our Main Stage this summer features rock, pop, eletronica, breakbeats, jazz, reggae and dub. The sounds mostly come from Europe and North and South America, although there are also strong influences from Africa and Asia. It is impossible to classify music by country because it breaks down borders everywhere.

Our objective is to promote diversity and to encourage experimentation.

The result will be a soundtrack for the future.

“Without music to decorate it, time is just a bunch of boring production deadlines and dates by which bills must be paid,” said Frank Zappa, a legendary American artist and iconoclast.

This is the spirit of ECHO. 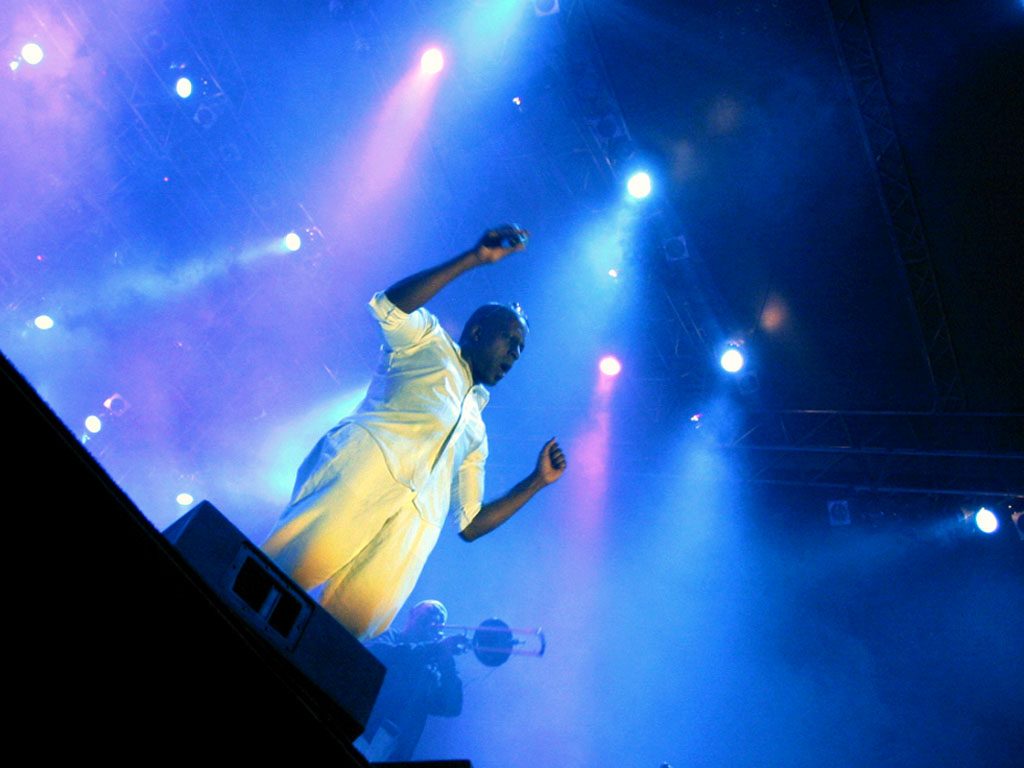 Here’s too much fear and loathing in the Balkans. What we need is a summer of love.

“Since music is a language with some meaning for the great majority of mankind, although only a tiny minority are capable of formulating a meaning in it, and since it is the only language with the contradictory attributes of being at once intelligible and untranslatable, the musical creator is a being comparable to the gods, and music itself the supreme mystery of the science of man, a mystery that all the various disciplines come up against and which holds the key to their progress.”

From The Raw and the Cooked by Claude Levi-Strauss, a French anthropologist 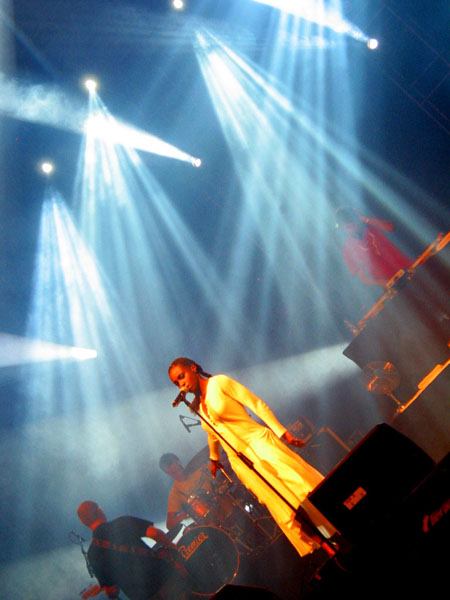 c) THE NATURE (AND NECESSITY) OF CHANGE

From an editorial published in the first edition of e/i magazine, Spring 2003.

“On many occasions I’ve been seen to snort when someone complains how they’re adverse to change, how they wish that things, people, the world, would stabilise, concretise, stay fixed.

“It’s truly a foolish notion really, since the passage of time and the very course of life generate and mandate change. Certain facets of society – marriage, steady employment, child-rearing, regular consumerism, etc. – provide anchors of sorts that bind us to our daily routines, give the appearance that how we live our lives day in/day out is a perpetual cycle fraught with only minor distractions.

“But it’s utter nonsense, because human existence is literally guided by myriad streams and currents that serve to alter the design of our lives in any number of infinite directions: our hobbies, social interactions, financial pictures… well, you get the point.” 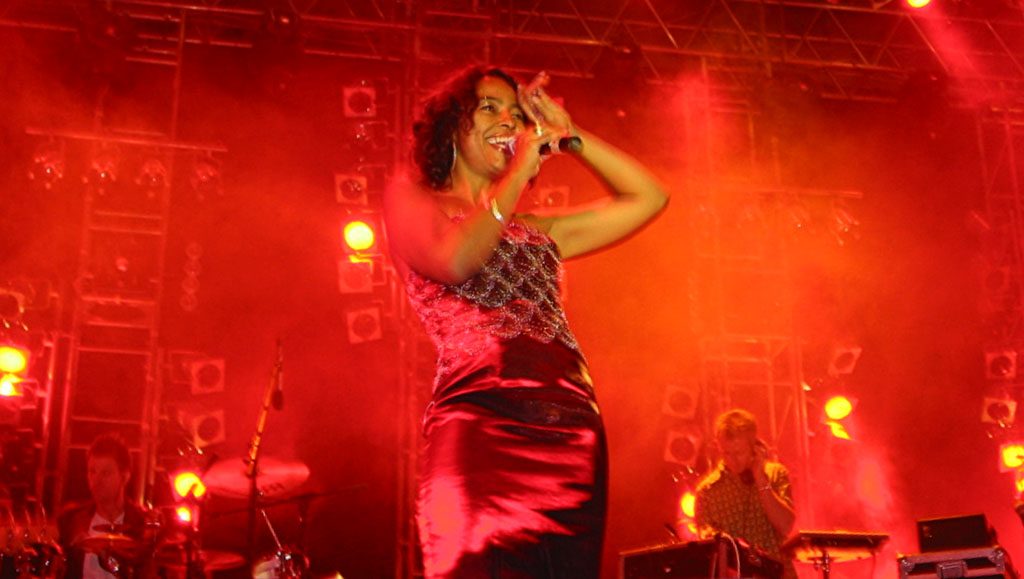 “Human history is a little like biological evolution: what there is in the present goes together in new ways to produce things in the future, the likes of which have never before existed.”

“In our world, every tiny event is recorded, and has influence, and that influence can be world-changing.”

“It is not chaos that historians should be turning to for instruction, but universality – the nearly miraculous discovery that under very broad conditions, systems made of interacting objects of all different kinds show universal features of behaviour.” 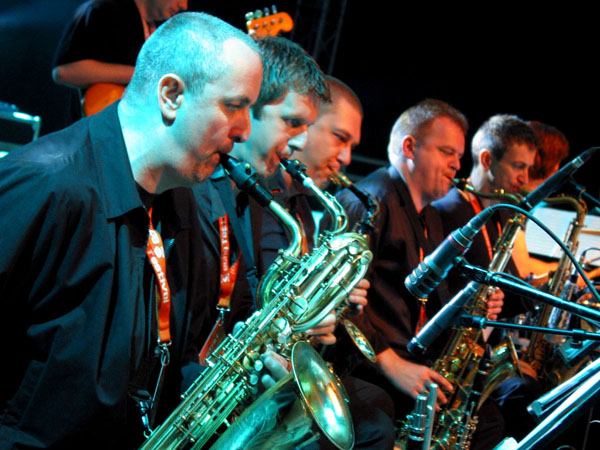 “I searched through rebellion, drugs, diet, mysticism, religion, intellectualism, and much more, only to find that truth is basically simple and feels good, clear and right.”

“Life is an illusion. Choose a nice one”

(SAME NEWSPAPER LETTERING AS IN THE PROGRAM)

“It is not my fault,” protested the American author Jack Kerouac, “that certain so-called bohemian elements have found in my writings something to hang their peculiar beatnik theories on.” 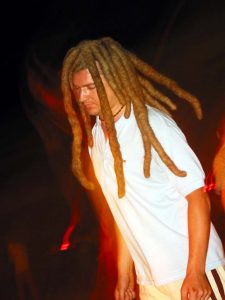