In 1970, Pran Nath travelled to New York to visit the American composer La Monte Young and visual artist Marian Zazeela, who heard his first issued recording, Earth Groove: The Voice of Cosmic India. In 1972, he established the Kirana Center for Indian Classical Music in New York City and stayed in the US for the rest of his life. He taught at several universities and attracted a strong following among the American minimalist composers.[4]

In the early Seventies, Guruji’s usual vocal tone was round, completely unforced in the lower range (only occasionally raspy); only occasionally cutting as he rose to high SA.  His intonation, vocal quality were beyond compare.

He would pour the raga out like a physically massive storyteller; his production was speech-like, not colorlessly pure.  It was always earthy, not precious—a certain roughness of speech.

Visceral qualities of the music had an effect.  Guruji’s occasional dwelling on tones in the low octave, as in Malkauns.  A visceral sense of grounding or foundation. 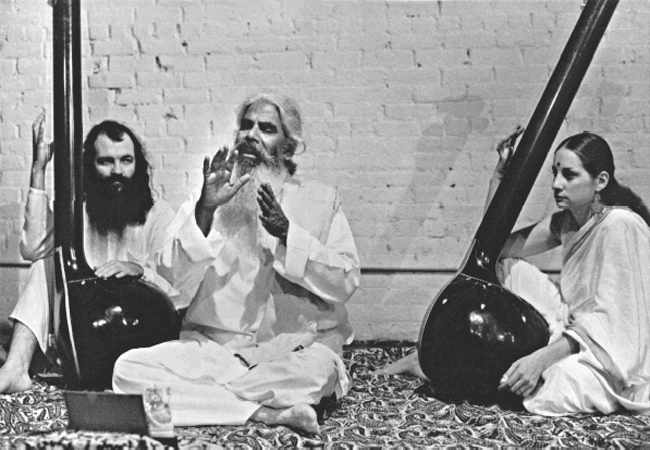 The Rg Veda draws a clear distinction between the rsi, who has known the Veda as the revealed Truth directly, and the ordinary human being, who can only have faith and worship this revealed Truth indirectly. At the same time, however, one’s indirect belief and worship in fact prepare one eventually to attain Truth for oneself. An important aspect of this preparation is to realize the importance of the principle that ‘’speech measures Speech’’, which the Vedas themselves apply in the form of a mystical etymology of symbols that offers a means of unraveling their underlying meaning. These verbal symbols, in effect, represent the hierarchy of gods which constitutes the outer, varied form of the One. 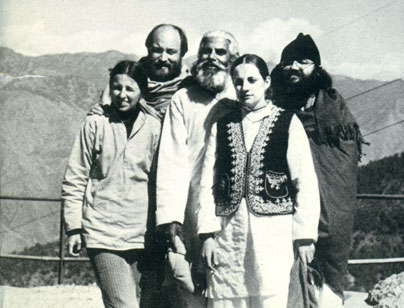 The deeper meaning of the Vedas hymns is the revelation of Truth as the One(ekam). Hence, the hymns themselves are considered to constitute the eternal transcendent space in which divine beings-the gods-repose, while those men-the rsi(s)-who understand the hymns in this way share in their divinity. The Vedic notion of the divine, therefore, unfolds itself in the structured relationship between the One, gods, and humans within the transcendent space found in the deeper meaning of Speech, which takes the form of the Vedic hymns.°