Have You Been To “Naru”?

(My days at Jazz Cafe)

Tokyo, 1968. I was 17. Flower Power and Existentialism, “Beggers Banquet” and “White Album”, Antonioni and Jean-Luc Godard, “Students’ Movement”. But for me, it was mostly a season of Jazz. It was the time of rebellion and the time of change, at least it still was in Tokyo. Coltrane had passed away the year before and Dolphy had long gone since ’64, but many of the Giants were alive and well, still producing their major albums. Miles was just about entering his electric band era with Shorter, Hancock, Carter and Williams on his side. “Miles In The Sky” (Miles Davis), “Alive And Well” (Phil Woods and European Rhythm Machine), “The Inflated Tear” (Roland Kirk), “Monk’s Dream”(Thelonious Monk), “At Montreux” (Bill Evans), “Now He Sings, Now He Sobs” (Chick Corea), “Memphis Underground” (Herbie Mann). I heard those, then new releases, the first time at a Jazz Cafe called “Naru”, in the dark basement room of a tenant building near Yoyogi station. 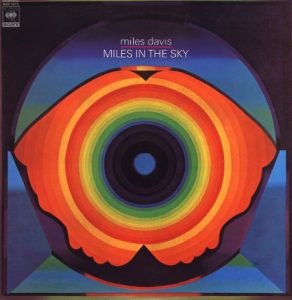 There weren’t any real live houses in Japan until the ’80s. What we had instead were Jazz Kissa (Jazz Cafe), probably 30~40 of them in Tokyo only, each with a 3000~4000 collection of jazz LPs and an incredible audio system for that time. Most of them had JBLs (Olympus, Paragon, etc.), or Altec A-7, A-5. Smaller ones had JBL Lancer 101, JBL Nova, etc. “Naru” had Pioneer’s 604 knock-off directly installed on the wall near the ceiling.

The popular amplifiers of those Jazz Cafe were JBL, McIntosh (both tube and solid-state), Ampzilla, Threshold, etc. Some were using custom made tube gears. The cartridge was almost strictly Shure V series.

A cup of coffee at 250 yen, almost twice the cost of usual coffee shop, but you could stay as long as you wanted. I usually spent 2~3 hours, 5~10 sides of album, 3~4 days a week after the school. You can make a request too, but don’t request “The In Crowd” (Ramsey Lewis), “Moanin'” (Art Blakey), “Left Alone” (Mal Waldron), “Sketches Of Spain” (Miles Davis), “Time Out” (Dave Bruback) or some such popular albums. The waiter and the guy at the turntable will look down on you as a novice, and they may ignore your request. You have to pick albums by Eric Dorphy, Ornet Coleman, Coltrane or other free oriented ones to let them know you really dig “Jazz”. Or, if you really want their respect, you can try some less well-known but solid performers like Sonny Red, Herbie Nicols, John Jenkins, Joe Wilder, Phineas Newborn Jr., etc. Me? My favorite albums of that time were “Watch What Happens” (Art Farmer and Phil Woods), “This is Chris” (Sonny Chris), “‘Nough Said” (Nina Simone), “Somewhere Before” (Keith Jarrett), “Four and More” (Miles Davis), “Sweet Rain” (Stan Getz). I guess I didn’t get much respect from them. 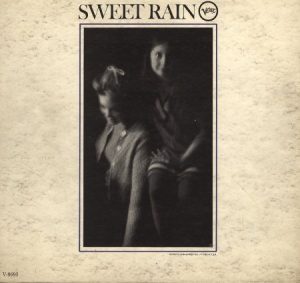 You didn’t hear much West Coast players either. Getz, Mulligan, Pepper, Desmond, Baker. You might enjoy those guys at home, but not at Jazz Cafe. It had to be, dark, deep, soulful, or angry. It was a place where you nurtured your anger, honed your fangs, and got ready for your next imaginary move. 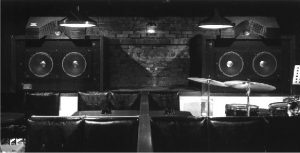 They played loud. I mean, LOUD! (average of 90dB+- depending where you sit) Once you were in, you couldn’t make any conversations. You couldn’t hear what the person next to you was talking about anyway. The waiter leaned down closely to get the order. Many of them were situated in the basement of a business building, the lighting is dark, 10~30 tables. At most of the Jazz Cafe, the sound was well tuned, so even though they played loud, it wasn’t bright, nor annoying. It’s just that the sound really hits you like when you sit in the very front row of a live house, and that’s how we wanted it. Many of my audiophile friends think I play loud, but they haven’t been to those Jazz Cafe. I get really frustrated when I hear a jazz tune played in small volume at demonstrations.

You could request Bill Evans though. Somehow, he established himself as a deep player among the Jazz Cafe regulars with his melancholic style and intelligent looks. His destructive lifestyle helped too. You have to be a tragic figure to be a hero. You count up every trivial misfortunes of your daily life, create a very special package of your own sorrow and angst, overlap it to the screaming tempo of Parker (until you realize your neighbor’s carrying the same bag, that is). Or meditate with Dorphy playing “You Don’t Know What Love Is” (Last Date). His flute brings you to the quiet core of your misery. You can almost cry. You were permitted. You were young. 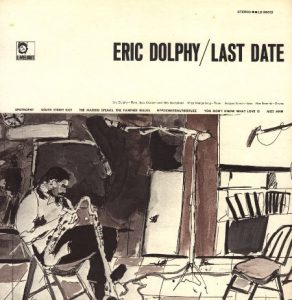 There were also Classical Cafe mostly with Tannoy/tube amp combination and Ortophon SPU. lllLZ, Lancaster, GRF, sometimes Autograph. They had a silky smooth but somewhat dark high which Japanese audiophiles often described as “the sound of oxidized silver”, and a bit more resonant bottom end mainly due to the cabinet structure. That didn’t work quite well for jazz bass (for me) but did magic to portray the body of string instruments and to add the feel of hall ambience.

I remember a couple of Rock Cafe too. One of them had A-7. I can still remember the sound of “Abbey Road” they played.

The classmate who introduced me to jazz was a total snob. He carried some albums at his side on the way to the school, with the cover facing out. “Jazz At Massey Hall” (Parker, Gillespie), “At Mintons’ Play House” (Charlie Christian), “Presents Mingus” (Charles Mingus), “In Hi Fi” (Chico Hamilton). Got the picture? He reads Sartre’s “Being and Nothingness” at Naru. I was more into Camus and Kafka. We were all Meursault and Joseph. K., lost in the labyrinth of our own adolescent excess. Jazz musicians were the guiding spirits in the whirling chaos in and outside of ourselves. Miles was “The Man” for me. ‘Here’, and ‘Now’, with his instrument as an only weapon, he faces the world on his own stand. It’s you and the whole world, with only an instrument on your side. Am I being too romantic? Maybe so. But, hey, if you are not romantic at the age of 17, when can you be?

The sound had this “ease” which I hardly hear from modern speakers. Those vintage JBLs, Altecs and Tannoys are rather narrow range (probably 50Hz~15kHz or so) and not as clean sounding as most of modern speakers, but they are very efficient and fast. For me, this “ease” of presentation is very important to get connected to the music, to feel the breath of the music. Most of modern speakers, in spite of (or because of?) their extended frequency response, feels constrained and laborious in comparison, and leaves me as an observer of the soundstage. In those vintage systems, woofers (Altec 515, JBL D130, 2220, etc.) came with a huge Alnico magnet and very light cone structure with a short stroke that allowed them very quick go-stop motion. Mid-high were covered by compression driver-horn. They were crossed at around 800Hz or so, so most of the base notes were covered by the woofer. Many of today’s commercially available horn systems employ almost the same configuration, but the woofers have longer excursion for low end extension, making it slower and sluggish. 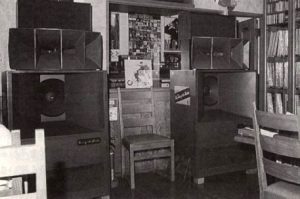 I approached a girl for the first time in my life. My middle~high school was boys-only. Only three women in entire school population of 2500. An administrator, a librarian, a nurse. I never talked to a girl of the same generation since elementary school. Unbelievable, isn’t it!? “Juku” (private after schoolclass) was the only place we saw other teenage girls. I took the girl to Naru three consecutive days after the class. The fourth day was the last day before winter-break. I entered Naru alone. My snob friend asks over the deafening sound,

“Wouldn’t give me her phone number!”

“Darn! Well, at least you went over one hurdle!”

I gave my request to the waiter who’d been waiting to take my order. By then, I was a regular, but never really exchanged any conversation with him. He gives me a sad smile. When he got back to the station, he took the album that was playing off the ‘table at the mid sentence, then put my request on, ignoring other requests waiting in the line. ‘My Back Pages’ (“Somewhere Before”, Keith Jarret). In the cavernous underground space, we were comrades. 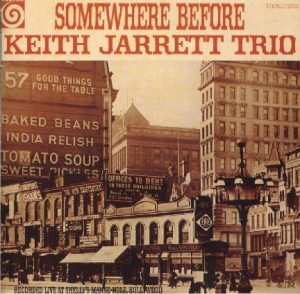 People talk about “musical system” these days. Well, for me, there are two kinds of “musical system”. One that connects you to the music so strongly that you forget about the gear and bath in the glory of music. The other that’s totally boring as an audio system, so you just try to concentrate on whatever the music it’s playing. Despite their shortcomings by today’s standard, those systems at Jazz/Classical Cafe definitely belonged to the former. They weren’t an all-around performer, like many of today’s mainstream systems try to be. Mainstreamers are like an all “A” student for me. They do academic things well, but whether you want to become friends with them is a different story. Your best friend may not do so well at school and you may have to help him with homework sometimes, but he can be fun, joyous and thrilling to be with.

The sound of Jazz Cafe lives in my memory and it must be very much beautified by time. If I could visit one of them today, the impression might be a bit different. But it gives me a slightly different perspective when I listen to a system and when I think about audio. Audio is so closely tied to music, and music to life. I don’t want it to be micro-managed just in the context of the current highend. Audio can be wider, deeper, richer, and more imaginative, than that.

Naru remained my favorite Jazz Cafe throughout the rest of ’60s, though I familiarized myself more with others too. “Dig”, “Dug”, “Mokuba”, “Funky”, “Outback”, “Duet”, “Genius”, to name a few. One early afternoon toward the end of ’70, on the downward stairs to Naru, I noticed the sound coming from below was very different. Strong, lively, sharp. I thought they had started a live session. It turned out they had changed the entire system, with the room extended further back. Instead of the familiar Pioneer, what resided at the far wall of the room was a pair of monster JBL pro system. 075, 375/537-512, D130 x 2/4550. The tune was ‘Dear Load’ (“Transition”, Coltrane). I stayed over 3 hours completely transfixed to my seat, album after album. 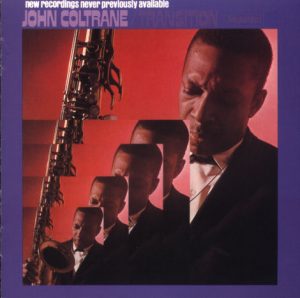 The sun was still out when I finally left. The streets were busy. There were people handing out special extra issues of newspapers. It was the paper telling about Mishima’s seize of defense headquarter and following hara-kiri. Although the Showa Emperor survived almost 20 years after that, it was the day the Showa period of Japan, with WWll in its core, truly ended. Miles went totally electric with his “Bitches Blew” in ’69. Shorter and Zawinul form “Weather Report” in ’71, Chick Corea with “Return To Forever” in ’72. Zeppelin shook the entire rock/pop scene with their first album in ’69. The wind was blowing. It was the time of change. The darkness slowly descended over the town of Yoyogi, covering the scenery with pale hue of gray. I was turning 20.

With the change of music scene and cultural climate, along with the rise of live jazz houses through ’70s and ’80s, many Jazz Cafe closed down by the end of ’80s. Only several of them still remain open in Tokyo.

Taken from the website Sakyrasystems, prducers of fine audio gear!